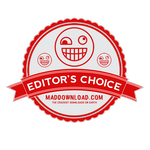 Type any accented characters for French, German, Spanish, Portuguese, Italian, Scandinavian and many other languages. Also Cyrillic, Greek and many other special symbols. This small Windows only desktop tool enables easy input of letters and symbols that may not appear on your normal keyboard.

This is simply an alternative to to other methods such as the Windows character map. Many people have found Extra Keys a convenient, easy option and it requires no configuration changes to your system.

Using the mouse, each letter will be typed directly into the selected application, at the current cursor position. The character is also copied to the Clipboard. In some situations, typing directly into another program may not work but the character can still be inserted by simply using Paste.

Choice of 'key sets' - offers characters from the Western and Eastern European 'Latin' range, Cyrillic, Greek, Georgian and Armenian alphabets. Certain symbols may already present on some keyboard layouts, but are not readily accessible on other international layouts.

When the characters are entered into your your application, most will display correctly with common Windows fonts. A few will need recent font file versions or an appropriate font choice.

Safe to use - Extra Keys synthesizes keystrokes, exactly as if entered from the real keyboard. It does nothing else and does not interfere with the target applications in any way. Independent of the Windows operating system, it needs no special installation.

Small, simple and minimal - the on-screen panel of keys is designed to be as compact as possible. A 'more/less' button enables rapid switching between display of alphabetic characters only or an expanded panel to add punctuation marks and special symbols. The program itself is also very small in memory, despite including its own embedded character font.

Quick to access - the button panel window minimizes to a system-tray icon, so it can be always available at a single click. The icon may optionally be loaded at Windows startup.

button refreshes the available application list. Extra Keys has been successfully used to enter directly into many applications, such as e-mail, word processing, spreadsheets and so on.

The program has always been included as part of our Plant Base software, and still is. However, we have made it available as a separate stand-alone freeware utility - free and unrestricted with no registration, no time limits, no adverts or nags. If you find it valuable, please consider making a small donation toward it's further development.

Also available and now free is the alternative Extra Keys Pro edition for more technical users who may need to edit source code for programs or web pages. This has an additional ability to output as various character codes but is otherwise very similar. Read more about Extra Keys Pro